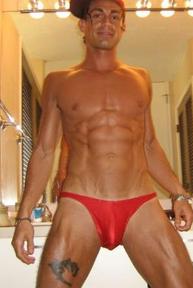 Johnny Impossible is the first secret artist to emerge in the USA who appeared in the news as far back as 2003 for a sculpture he created titled "The Dream Machine." He disguised his face by wearing a mask to hide his identity.

The reason is not fully known as to why, however; there is a belief that he is a descendant through the bloodlines of Leonardo da Vinci, Pablo Picasso and Salvador Dali. 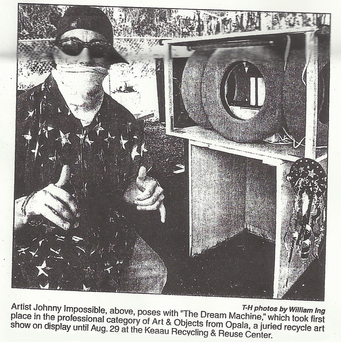 ​It is known by many that when Johnny was a young boy he was adopted into the family of a famous man who was one of the last decedents of the old monarchy of the Kingdom of Hawaii (Johnny was a hanai).  If the monarchy existed today Johnny would be one of the Princes of Hawaii.

Johnny took first place in the professional category of Art and Objects from Opala, a juried recycle art show on The Big Island of Hawaii in 2003.  The sculpture in the show “The Dream Machine” was a first-of-a-kind fully electronic sculpture in the round.

The artist Bansky may have been inspired by Johnny Impossible when he portrayed an image of what looks to be Johnny on the front cover of his book "Wall and Piece" which has a quote that reads "We don’t need any more heroes; we just need someone to take out the recycling."